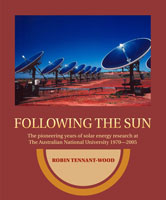 Following the Sun: the pioneering days of solar energy research at the Australian National University, 1970-2005,

Member of the Australian Society of Authors