On the whole, wombats are endearing animals.

They keep to themselves, are quiet neighbours and their babies are just downright adorable. Coming home from the morning walk with the dog one day a few months ago, there was a baby wombat playing at the entrance of the burrow opposite my front gate. This particular wombat burrow is dug into the soft soil of the road embankment, and given that this is a dead end road and there's only one gate further along from mine, there's no danger of the wombats being hit by cars 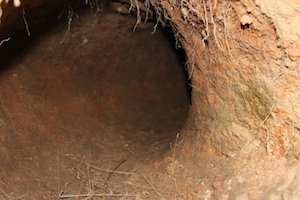 or undermining any infrastructure. I took a photo of it a couple of years ago (right) by getting my head and shoulders into the wide entrance and then extending my camera down as far as I could reach. I have no idea how much further it goes, but it's quite an architectural achievement.

I like wombats in their natural habitat. It's when they decide to share mine that we have a problem.

Two winters ago a wombat decided that the space under the yurt would be a nice place to dig a hole, and proceeded to do just that. Now, while I like wombats and wildlife in general, and I am more than happy to share my space with them on the basis that they, as a species if not individually, were here before me, there are limits. The excavation of the electrical cables and the construction of a burrow under a stump of the house was that limit. The wombat had to go.

I recently read a description of a wombat (I don’t remember where so can’t attribute it) as being ‘a cross between a guinea pig and a panzer tank’. Ever tried evicting a panzer tank?

It took time and effort, but with a combination of systematically filling the hole with rocks when the wombat wasn’t in residence and chasing it around the yard at night loudly remonstrating when it was, it finally stomped off elsewhere. 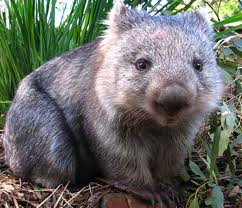 Being woken several nights in a row by the unmistakable sound of wombat excavations in progress, I investigated the space under the yurt. The problem is that there is only enough clearance under there for a wombat, not a human. From where I was peering there appeared to be no obvious signs of a new hole being dug. There was a reason for that. There wasn’t a new hole. What was being dug was a new entrance to the existing hole, this time coming in from the opposite side of the stump that had been excavated the first time.

The wombat is not in residence, I think he or she is just using this hole as a playground, or perhaps with a view to a holiday home or something. In any case, I have now thrown four barrow-loads of rocks down the hole, rock by rock, aimed from the side of the yurt closest to the hole.
Next weapon is a couple of sheets of concrete reinforcing mesh to be laid over the whole wombat condo complex and then cover that with more heavy rocks.

Anyone who read the story of Harry the Hairy Nosed Wombat when they were a kid will know that wombats are not easily deterred. They are possibly the most persistent critters on the planet. Block up one entrance and they’ll just dig another one as close as possible to the first and this particular wombat is going to take some serious deterring.