We're on our own: changing the system

Remember that wonderful opening to The Hitch Hiker’s Guide to the Galaxy? The bit where Arthur Dent is arguing with a council official about a road bypass that’s going to be built right through his house. The council official dismisses him by saying that he could have put in a submission to the plans:

“But Mr Dent, the plans have been available in the local planning office for the last nine months.”
“Oh yes, well as soon as I heard I went straight round to see them, yesterday afternoon. You hadn’t exactly gone out of your way to call attention to them had you? I mean like actually telling anybody or anything.”
“But the plans were on display …”
“On display? I eventually had to go down to the cellar to find them.”
“That’s the display department.”
“With a torch.”
“Ah, well the lights had probably gone.”
“So had the stairs.”
“But look, you found the notice, didn’t you?”
“Yes,” said Arthur, “yes I did. It was on display in the bottom of a locked filing cabinet stuck in a disused lavatory with a sign on the door saying Beware of the Leopard.”

If there’s one lesson that stands out from all the others we’ve learned over our Summer from Hell, it’s that we can’t rely on government – at any level – to come to our assistance in a crisis. There will be obstacles, obfuscation and officiousness. There will be hand-wringing and head-shaking. There will be promises and premises and proposals – most of which will likely end up in a (metaphorical*) locked filing cabinet in a disused lavatory with a sign saying Beware of the Leopard.

We’re on our own.

We need sustainable local systems and a circular economy. We need these things to both protect us in the event of future crises, and also to insulate us against the inadequacies of a linear economy and a government unprepared or unwilling to deal with the reality of climate change.

There are seven key elements:

During the bushfire crisis, many towns found themselves cut off for days. This became more than a natural disaster, this was a humanitarian crisis. Our society has become reliant on external supplies to the point where we cease to operate when there is interruption to those supplies. Sustainable local systems can be built to provide food, shelter and basic supplies to all residents if the external system breaks down.

Geraldine Brooks’s wonderful Year of Wonders, is a fictionalised account of the true history of the English village of Eyam that isolated itself during the plague. The townsfolk decided that in order to contain the disease and stop its spread after it had already arrived in that town, they would cut themselves off from direct contact with the rest of th 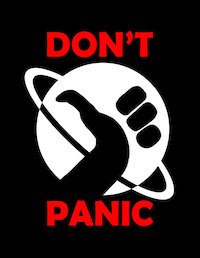 e world. No one came in, no one left. This happened six hundred years ago.

If they could do it then, we certainly have the resources to prepare for it now. Local renewable power, local food security, local water supplies. This is what resilience looks like.

Or to put it another way, in the words of Douglas Adams: Don't panic.

* Probably metaphorical but I wouldn't bet on it