Watch where you walk!

As well as luring me and most other outdoorsy, gardening types outside after the winter hibernation, the warm weather has also brought out some of our less than welcome garden co-habitants: snakes.

After the first flush of the warm weather last month, my neighbour and I were walking our dogs down the little bush track to the Shoalhaven and encountered a huge brown snake, probably the biggest I have ever seen, sunning itself on the track. Fortunately we saw it in time to allow it space to get away and the dogs were on leads so they couldn’t get close. The next day I saw a very small red-belly black on my driveway. Yes, they’re out and about and everyone has a theory about how to keep them away from yards, pets and gardens.

Around here the most common species of snakes are browns and red-belly blacks, followed by tiger snakes and copperheads. None of which I particularly want to encounter while dancing barefoot among the petunias.

Yesterday I had a long talk with our local snake expert and here’s what I learned: 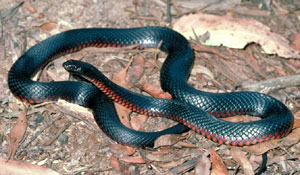 If you encounter a snake inside your house (this has happened twice in my house), don’t try to catch it or kill it yourself. Call in your local wildlife group or snake handling professional. The majority of snakebites occur as a result of someone trying to kill the snake. Not surprisingly, snakes take a rather dim view of this behaviour.

Watch where you walk!