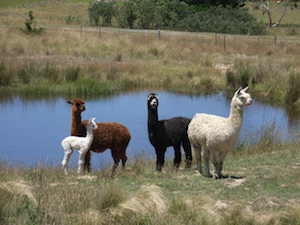 Some months ago I had my three remaining alpacas, Honey, Meru and Mzungu, rehomed. For the past four years they have been happily grazing three acres of my property, but with an El Niño summer looming and grass and water both low and potentially getting lower, I thought it best to get them shifted to a bigger paddock. While they’re now munching their way around a property at Manar and guarding lambs from foxes, I’m suddenly faced with three acres of grass that used to be well-trimmed and now, liberally fertilized from the pacas and watered by early November rain, is growing and waving in the breeze. Once it dries off in the heat I’ll have a snake-harbouring fire hazard. Fabulous. Just what everyone wants! 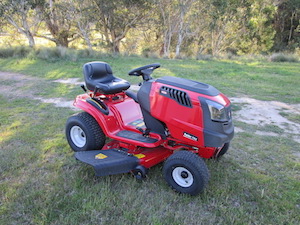 It’s red. It’s shiny. It mows backwards and forwards. It has a stubby holder. No blade of grass is safe!
Admittedly, it will be more expensive to feed than the alpacas. They were happy with grass, occasionally supplemented with oats and lucerne chaff. But it won’t need to be shorn once a year and so far it has refrained from spitting on me.

It does lack the personality of the alpacas but maybe that will develop with time, and I somehow don't think the neighbours' guests will line up at the fence to take photos of it in the same way that the pacas became the focus of attention on numerous occasions. It will, however, keep the grass down and that's the point of the exercise.

All I need now is a little trailer for it, so I can get a 1000 litre water tank rigged up as a mobile watering system for the garden.