Spring in the garden

Never one to conform too rigidly to social norms, this year I have thrown caution to the wind and flouted the only rule that applies to gardening hereabouts: the ‘don’t-plant-summer-vegies-until-after-the-Melbourne-Cup’ rule.

Early spring warmth lured me outdoors in September and with the forecast looking promising, I had tomatoes, chilies, cucumbers and zucchinis planted by October. Eggplants, beans and pumpkins followed shortly thereafter.

Then comes four weeks of nervously watching the weather forecasts and the thermometer in the garden and assessing the likelihood of frost every evening. So far, so good. It’s gone close a couple of times and I have the hessian bags ready in case I need to get out and cover up my now quite healthy looking plants if the temperature dips into the danger zone.

Of course, this doesn’t mean that I won’t lose the lot to a late frost in December, it’s happened before, but the Melbourne Cup seems to be the generally accepted cut-off line. The kiwis use Labour Day, which falls in the last week of October, as their guide to summer planting.

I like the symbolism of Labour Day and planting. There’s something soul-affirming in the idea of spending a public holiday to celebrate labour, engaged in the timeless activity of planting for the new season. Whether it’s the summer vegetable crop or flowers and shrubs, getting dirt on the hands and sun on the back brings us into contact with eons of ancestors who have done the same thing.

Being able to grow food is one of the things that makes us human. Even if it’s only a couple of pots of herbs on a kitchen windowsill, or a tub of salad greens and tomatoes on an apartment balcony, there is something magic about that combination of soil, seeds and water that connects us with all life on earth, and with all generations of people, past present and future.

Me? I am delighted that one of my almonds trees is fruiting for the first time since I planted it six years ago. My apples trees and blueberries are also bearing fruit.

I have, as well as the frost-tender summer vegetables, rows of celery, turnips, carrots, beetroot and radicchio. There has been more asparagus than I could use and I have pickled some of the excess. The silver beet is going well and I have a large tub of mixed horta greens which form the base of my salads as well as stir-fries. 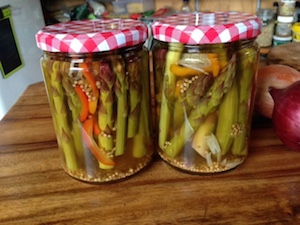 I have, as usual, planted too many zucchinis and come January I won't be able to give them away, but with the early planting, and, with luck, no late frosts, I should have the holy grail of all gardeners in this part of the world: tomatoes at Christmas!