Slow down for wildlife ... and birds are wildlife too!

The moral of the story below: please slow down on our country roads. We might think we own them, but we share them with wildlife and these critters are important. So important are they that I think everyone should support the cause by buying a 2016 Wombat Calendar. 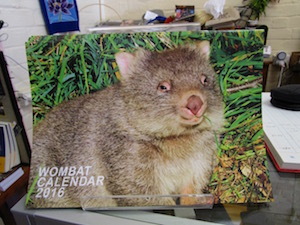 The baby magpies that hatched in spring have left the nests and are learning to fend for themselves in the wild. Unfortunately, ‘the wild’ also involves traffic, which, on our country roads usually travels at a speed not conducive to allowing immature birds the space and time they need to get out of the way.The result of this is that the Cooma Road looks like it's open season on baby magpies. While the adult birds are able to negotiate their way around cars and trucks and get out of the way in time, the little ones simply haven’t acquired the skills yet.

Yesterday evening driving home from a book launch at the shop I saw what I thought was a dead baby magpie in the dust at the side of the road where it has been dug up for roadworks. As I passed it, it flapped a wing and tried to move away from the road. It was about 7.45pm, the sun hadn’t set but the shadows were long and deceptive. Did it really move or was it the wind?

I pulled over, turned the van around and went back. The little bird was very still but as I got out and walked over it flapped again. Fortunately I travel with a collection of dog towels in the car so I got one, wrapped up the terrified bird and put it on the seat next to me. Still in mobile phone range, I dialled the number of the local wildlife group. It went to voicemail so I left a message. Phoned the next number on their list. It also went to voicemail so I left the same message. Nothing to do but take the injured bird home and wait for the wildlife people to get back to me, which I knew they would.

Did I mention I’d come from a book launch? Uh-huh. I had forgotten I was still wearing a Santa hat. As you do. In the back of the van I had the crate of empty glasses to take home and wash so the car smelt like the bottling room in a winery. I was on the phone while driving. Ever so slightly illegal. Fortunately I hadn't been drinking, because coming towards me through the dust haze was the unmistakable form of the local police 4WD. Santa hat, car smelling like a winery, on the phone while driving... I waved to the officer and he waved back.

The next challenge was what to do with an injured baby magpie while I sought advice and waited for the wildlife rescuers to get back to me. I put it in a box, which I lined with straw, covered it with a towel and left it in my mudroom where it would be warm, dark and out of reach of the cats. It turns out that that was precisely the right course of action. The wildlife rescuer got back to me a couple of hours later. They’d been out at Mayfield with an injured wombat. We arranged for them to collect the bird from me at the shop this morning.

Happy ending. The baby magpie survived the night in its box, was collected this morning and has gone out to Howard Ralph’s wildlife surgery for treatment on a likely broken hip. Once rehabilitated, it will be returned to the area where I found it and hopefully has learned its lesson about roads and cars.

I didn't get a photo of the baby magpie and the ones around my house have suddenly become camera-shy. I'll upload one when I can get one.